Xamarin.Forms is a great platform; saves a lot of time when it comes to design, fast growing platform and most important it supports MVVM and Xaml natively, I cannot be greatful enough for having Xaml around.

That is great especially for those who worked before with WPF and MVC.net. However, as many of us know that Xamarin.Forms does not support all features or perhaps there are alot in the native platforms which are not supported a small example is Videos and Maps ,of course there are plugins you could have covering these missing parts but then why do we need to download a 3rd party plugin which many times suffer from bugs and can be abandoned or write a custom renderer yourself with all bindable properties just to make a label with shadow or extra color. And do not let me start talking about compatability with latest native versions of android libraries. 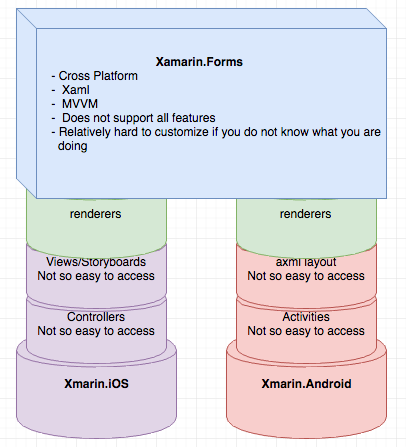 Once you are a Xamarin.Forms developer it is hard to go Xamarin.Native as you have to understand how the architecture works of each platform, what is the best practices, the names of the components and so on...

I was thinking that day and wondering how nice it could be if we can write android or/and ios apps natively using our knowledge of Xaml and MVVM and having access to all components that is offered by these platforms including all the properties.
So this is my idea , Xamarin.Forms.Native ... or a better name

When I imagine the architecture of Xamarin.Forms.Native (XFN ) should be something like this.. 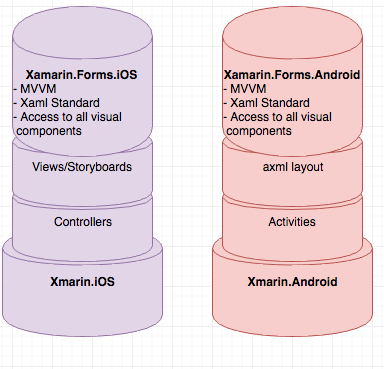 XFN should use the coming Xaml Standard when it is possible. When it is not possibe, the names of controls in the native platforms can be then easily used.
MVVM helpers should be easily installed on XFN such as Prism. The way navigation works in Xamarin.Forms shuold still be working fine in XFN. This way moving between Xamairn.Forms and XFN as a developer is a peice of cake .

For example, this code below is writtin using XAML Standard to represent standard contols which come out of the box from android or ios , but in this case notice that I am also using a non standard control which is in this case FloatingActionBar. I am not realy sure if i am using it's properties correctly and for sure my selection of colors is not the best

but I hope you can get my point.

XFN should be an Android Class library or iOS class library. This way we can still get the packages intended to be used for Xamarin.Android or Xamarin.iOS. A small example of this is in case we wanted to use VLC library , or if we simply create a binding library from a java based library. In this case we should be still able to see it's properties from Xaml, and extend it to make some of its properties bindable .

Since it supports Standard Xaml. Two teams can be assigned for Xamarin.Forms.Android and Xamarin.Forms.iOS development and they will still be to produce products which can be seen by the users as if they are coming from the same team.

Some people might say MVVM Cross , or Native embedding. But to be honest these are workarounds for me . With MVVM Cross (or similar frameworks) there is a lot of boiler plate you need to go through plus you still have use ativity layout approach or MVC approach for android or iOS .
Native Embedding never worked for me , and I am sure that it did not work for most people , I think the fact that it should be done in a shared project is a challenge by itself.

That was my suggestion. What do you think ? do you think it is a good idea ? or maybe does not add any value ?